Excerpt from "Other Side of the Line" Countdown to Release - 14 Days!

Caleb’s teacher paced across the front of the classroom, leaning on his cane, his white hair gleaming in the afternoon sunlight. “Now can anyone name a hero from the War of Northern Aggression?” He paused and focused on Hal in the front row. Hal had just started in their class on Monday, coming all the way down from New York. “That would be the Civil War for those of us who might not understand… given their unfortunate origins.”
“Oooohh!” Hal’s hand shot up. He talked funny, fast and with a strange high accent. He liked to try to answer all the questions, and sometimes he stared at Caleb too much, but he never seemed mean about it, only curious. At least his eyes didn’t slide away as if Caleb’s skin was covered in rancid oil, and that made for a welcome change. 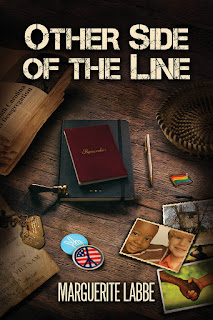 Mr. Gibbons looked around the room to see if anyone else wanted to volunteer, and his gaze lingered on Caleb for a moment. Several answers crowded his mind, and Caleb sifted through them trying to think which answer would please him the most before settling on General Beauregard. Still, Caleb remained silent and prayed he wouldn’t be called on again. He wasn’t too fond of the teacher’s method of asking questions. It made him feel small and ignorant.
Mr. Gibbons focused on Hal again. “Well, Hal?”
Hal straightened, his shoulders squaring with pride. “William Tecumseh Sherman.”
The classroom fell silent, not a rustle of a page or a rattle of a pencil to be heard. Caleb’s mouth fell open as Mr. Gibbons’s face turned a mottled red, and his hand tightened on the cane. Hal seemed to sense how deep he’d stepped into it, because he looked around the room, his little freckled face drawn together in confusion.
He caught Caleb’s eye, and Caleb couldn’t stop himself from grinning. “Amen,” he mouthed, and Hal smiled back.
“Stupid Yankee,” James snarled under his breath, breaking the quiet. Caleb glanced at him, saw the way his hands had tightened into fists and how his gaze glittered through dirty-blond hair. There would be trouble later on.
Mr. Gibbons pounded the floor with his cane, his bushy brows coming together in a fierce frown. “Sherman was a war criminal,” he thundered. Hal turned to face him, his shoulders sagging. “Stand up! Tell me and your classmates why you think a man who burns his way through enemy country, depriving its citizens of food and shelter, should be called a hero?”
Hal stood reluctantly and glanced around at the rest of the class for support that wasn’t there. “Umm, I guess that wouldn’t be very heroic, sir.”
“Do you think a man who tries to break the spirit of a people in the name of conquest should be called a hero?”
“No, sir,” Hal said again, his voice even quieter now. He stared down at his feet and flinched when James snickered. Caleb felt the pang of remembered humiliation when he’d been in similar situations. It was mighty painful to be the object of everyone’s attention when Mr. Gibbons had his irritation focused on you.
“Speak up, young man! Don’t mumble.” Mr. Gibbons jabbed his cane in Hal’s direction. “I cannot abide a child who cannot make themselves understood. They have no place in my classroom. Answer the question.”
“No, sir!”
“You need to reexamine your definition of a hero, now sit down and remain silent until you have something positive to offer.” Mr. Gibbons pounded his cane again for emphasis.
Hal dropped into his seat, the nape of his neck turning a fiery red. He remained quiet for the rest of the afternoon, his head bowed, his whole body hunched. Caleb felt another one of those little pangs. He’d been in that same exact position too many times to count, afraid to meet Mr. Gibbons’s gaze, and forced to hear the other students whispering about him. It was horrible.
James especially made his opinions about Hal known with several vicious comments pitched low so Mr. Gibbons, with his worsening hearing, wouldn’t catch. Hal certainly did hear them and curled in even tighter. Hal was sure in for it now. He probably didn’t realize how bad though. Caleb should be glad James’s attention was turned from him, at least for now, but he couldn’t help but feel sorry for Hal. It wasn’t going to be pretty when Mr. Gibbons released them for the day.


If Caleb was smart, he’d be long gone before that happened. Maybe he’d get a chance to warn Hal to get himself home fast, though that would only delay the inevitable. Sure as the sun rose over the Atlantic, James would make sure to get his licks in whenever he could.

Coming September 18th from DSP
Posted by Marguerite Labbe at 5:33 AM

Email ThisBlogThis!Share to TwitterShare to FacebookShare to Pinterest
Labels: Excerpt, Other Side of the Line