Last week, my day job sent me to NYC to participate in a pilot training program. It’s been many years since I’ve been to New York. The last time was 2010 I think when I when up for the Rainbow Book Fair. I have many memories of the city. The first time was when I was seven and my dad was transferred from Ohio to base not far from Manhattan. I’ll never forget the acute shock of going from wide open prairies to those immense skyscrapers that clawed at the sky. We only lived in New York for a year, but I remember my time fondly, except for the Catholic school uniforms. Oh I hated those uniforms. 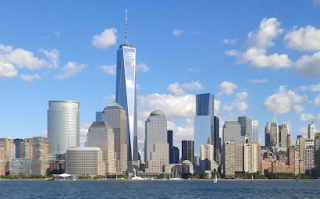 Afterwards, when we lived in Ohio, we would pass right by Manhattan on our way to visit family in New Hampshire. We also used the Twin Towers as a landmark for our halfway point. We used to love coming around the corner and seeing the standing and we talk about our memories of New York.

We visited often after we settled down in Maryland. It’s not a far drive and it’s a nice train ride. My girlfriend and I used to come up a couple times a year to see a WWE show one night and a Broadway play the next.


After 9/11, it was always such a shock to come around the corner and have that part of the sky empty. Now after that long hiatus, when I was sitting on the train, I experienced the same kind of shock to see the new One World Trade Center building. It’s beautiful, it’s not the same. I think it’ll always ache to see it, but it’s good to see something there again. I get the same feeling when I go by the Pentagon. It’s fixed, but I’ll never forget the sights and sounds of that day.
But it was pretty damn cool to walk out of Madison Square Garden to look up at those giant buildings and get the same feeling I did as a kid. New York City was still New York City. Even being a Red Sox girl, I love it.
Posted by Marguerite Labbe at 11:13 AM