Back in September I discovered a wonderful thing. My girlfriend Jamie can replace brakes on cars. Which was good because my front brakes were in dire need of replacing and I had zero money to do so. She also knows a contact for anything we could ever need. So I scrapped the money together, bought new brake pads and rotors and trucked myself over to her place deep in the rural bowels of my county. It was so much easier than I thought it would be and there’s something very sexy about a girl who can jack up a Highlander and take care of business.

So when my rear brakes started going around Christmas I waffled between trying to do them in the cold or coming up with the extra cash to go someplace warm and have it done. My girlfriend said she was game, as long as it wasn’t under 40 degrees. So I toughed it out a few weeks waiting for a break in the cold. Then it snowed and I knew I couldn’t wait any longer. So we made plans for MLK weekend to get my baby fixed.

It was cold. Hovering near 40 if I remember, so I doubled up on my socks, put a shirt on under my sweater and stopped by the auto store for another round of goods. It was supposed to be an easy day. It was 10 a.m., we’d get Duncan (my Highlander, yes I was a fan) good to go, I’d hit up the grocery store on the way home, then I’d have plenty of energy and time to go home and get in my word count for the day.

But when we got Duncan jacked up and managed to remove the tire that seized the caliper fell off. Jamie can curse when she wants to. So we had to call around town for someone who had the part in my year. At first it looked like it would have to be ordered, which would leave me stranded, but we managed to track one down. Did I say Jamie lives in the middle of nowhere? Going to town to get parts means a trek and we also needed to find long threaded bolts because I did what I always do and put the emergency brake on when I stopped. So we needed to find bolts to get the dang rotor off.

So three car part stores and two hardware stores later we have the caliper, the threaded bolts, (which were impossible to find in the right length. I bought her a kit as an ‘I’m so sorry I love you to death’ present) and lunch we head back to her place. But we have to make a stopover at the farm to change the blankets on the horses. By the time we get done with all of that it’s almost 3:00. (Did I mention she lives in the boonies?) We get the brake pads, caliper and rotor replaced on the one side. The shoe looked worn, but she said to have a mechanic to take a look at that because it was getting later, freezing and she didn’t have as much experience with it. No problem. We changed the other side and yay I was ready to go with time to spare for the grocery. I had plans for a nice hot soup, because I couldn’t feel my feet anymore.

But when I take off, it sounds like there is gravel rattling below. Doesn’t sound right. I call my girlfriend who’s in the middle of calling me and she says come back now. So we jack up my baby again and study the rotor. There’s a little pin and spring jutting out from the shoe and as the rotor turns it hits it just right. So my girlfriend starts cursing, takes off the rotor to see if she can fix the spring on that side of the shoe, but it’s borked and warped and there’s no fixing it. 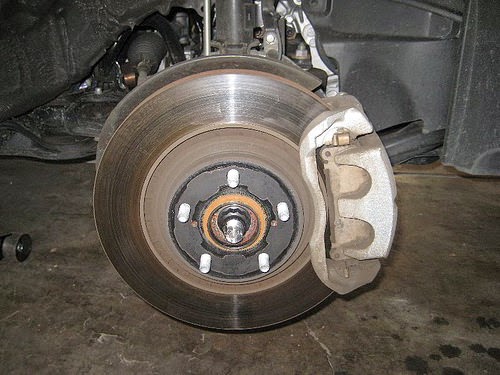 So I text my husband, tell him to order Thai, the hotter the better and we’re off, heading back to town for a new shoe. I pick up some toe warmers too. Amazing things. Only part of my body that was warm. The sun is long down by the time we get back, but we turn on the floodlights and get to work. The rotors, pads and caliper was easy. The shoe isn’t. There are springs and pins and bolts and little odd shaped bars that don’t want to fit back the way they were. It was a pain in the ASS. And since I didn’t know squat my sole contribution was fetching tools, listening to Jamie curse, and telling her how much I loved her.

It got done. We test drove it with no noise. The brakes worked perfectly and even passed the cat running in front of the car brake slam test. But I didn’t get home until after 10 and though the Thai food was amazing and warmed me up I still ended up finally coming down with the bronchitis that had been stalking me since Christmas.

I’m not sure what the moral of this story was. But I still think it’s pretty bad ass that my girlfriend knows all this stuff. I told her next time she does something mechanical give me a call. Just make sure it’s warmer

And for giggles, a random comment heard in writechat today:

“My neighbor makes me so mad I want to piss “bitch” onto her snow covered car. Too bad I don't have a dick to do it with. Oh, for want of a cock.”

More to come re: "Other Side of the Line" submission and the awesome sci-fi/horror I'm working on now. :D
Posted by Marguerite Labbe at 4:55 PM