Time In a Bottle

Good afternoon everyone.  I've emailed the winners from the New Year's Day contest.  In the meanwhile, I've been busy wrapping up the second draft of my lastest story Time In a Bottle.  I just sent it off to beta readers yesterday.  I hope to have it polished and submitted by Valentine's Day so keep your fingers crossed.  In the meanwhile I thought I'd share the blurb, the opening bit and a NSFW picture with you. 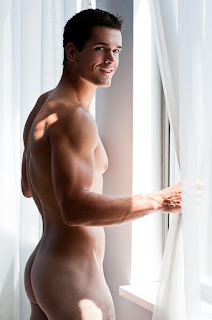 Now this man right here *fans self* He reminds me
of Dean.  His hair is a little darker than Dean's, but
that nice guy smile absolutely fits him so does that
beautifully toned  body.  I haven't had any luck
hunting down the perfect picture that reminds me
of Andrei, but when I do, I'll share that as well.

I hope you enjoy!
Posted by Marguerite Labbe at 10:27 AM