First off the cover because I'm absolutely in love with it.  Reese Dante is amazing.  She took what I had in my mind and made it so much better. 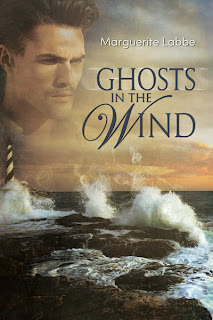 Andrei Cuza and Dean Marshall celebrated their tenth anniversary only to have their happiness shattered by a random, insane event: On his way home from closing a business deal, Dean stops on the parkway to help a young mother with her flat tire, and her ex arrives, murders them, and takes off with his two kids.

Ghosts have haunted Andrei all his life. He bears the guilt for his sister being stuck in limbo, because ghosts are frozen at the moment they died, unable to adapt to the changes in their living loved ones. When Dean returns to Andrei as a ghost, the double punch of losing him and having to watch him founder if he doesn’t move on is almost more than Andrei can bear.

Despite dangers in limbo—Jackal Wraiths that devour souls are hunting him—Dean isn’t going anywhere until he helps Andrei track down the missing children. Andrei is in danger as well when he pays dearly to feel Dean’s touch one last time. Time is slowly running out as Dean and Andrei try to say good-bye while they track a killer who’s more than happy to kill again.

A Bittersweet Dreams title: It's an unfortunate truth: love doesn't always conquer all. Regardless of its strength, sometimes fate intervenes, tragedy strikes, or forces conspire against it. These stories of romance do not offer a traditional happy ending, but the strong and enduring love will still touch your heart and maybe move you to tears.

Finally after all this time my ghost story is coming out.  I originally came up with the idea on a road trip to South Carolina and I think it was very fitting that I ended up working on DSP edits for it while in SC again for my sister's wedding.  I hope you all fall in love with Andrei and Dean as much as I did.  Later on this weekend I'll post an excerpt!
Posted by Marguerite Labbe at 6:38 PM