Not too long after my husband and I got married, I was gifted with a silver tipped tabby for my birthday by a family friend.  I love cats, well dogs too, but I was never allowed to have a cat growing up.  My mom thought they were evil and out to get her.  My husband never had the pleasure of a pet before and was pretty wary over the whole idea, but let the kitten stay.  We were assured by friends who had multiple cats that our beautiful little kitty was a girl.  So I dubbed her Sappho.  Only to find out later during a vet visit that my girl was a boy, only he answered already to Sappho so he kept the name.  He hated me.

Sappho however adored my husband.  He’d take nips at me and sit on my husband’s chest for hours on end whenever my husband came home upset over work.  He was a social worker so it happened quite often.  As much as that cat disliked me, he hated my son even more because after he was born my husband’s attention was divided.  I still miss him, because he was so good for my husband.  He passed three years ago just before Christmas.

A year later another family friend gave him two silver tipped tabbies from the same litter.  He’d been out of work and was down and I thought it was time.  We also thought that the cats would be less lonely when we were at work if they had each other.  At first, again, my husband was unenthusiastic about the idea, until he went to visit the girls.  You’ve never seen such a big old softie I swear.  He looks like a big bear, but she’s a sucker for these two. 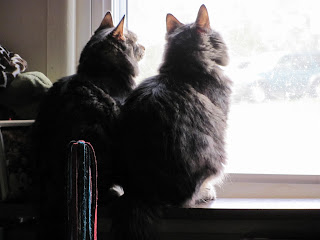 This is Isis and Osiris staring out the window.  One of their favorite past times and this is Osiris.  Isis won’t let anyone take close ups of her.  They are almost exact opposites of each other in some ways.  Isis is afraid of everything.  If there is a loud noise she jumps.  Whenever anybody comes to the door she runs around the corner and will look at us like we’re invading pod people until she calms.  And heaven help me, she molts when she’s nervous.

Osiris on the other hand is afraid of nothing to the point where I wish that she would have a healthy dose of self-preservation.  She growls at dogs that go by the window.  Slapped my sister’s dog who tried to chase and got them to obey her.  She even tried to stick her nose in a candle flame once.  She’s just too curious for her own good.

These two girls take turn being cuddle bugs.  They like to come up and rub their faces against us.  And if we don’t pay attention right away they’ll trill or meep at us.  I almost never hear them meow at all.  And the love my son, they treat him like he’s one of the litter.  When he sets up his toy soldiers, they’ll come and watch, then knock them down one by one.  They steal his legos and put them in boxes to bat around, they even stole his balloon.  He’s convinced that they scare away ghosts and when he goes to bed, Isis curls up next to him and Osiris sits in the doorway like she’s guarding him.

Please, share some of your favorite pet stories and pictures with me.

Posted by Marguerite Labbe at 7:07 AM

Email ThisBlogThis!Share to TwitterShare to FacebookShare to Pinterest
Labels: Cats